My official sponsor for the Great Scottish Run.

Well the time has come and I am ready for my final running event of the year raising money for Yorkhill Children’s Charity. I will take part in the Great Scottish Run on Sunday and I am delighted to announce that my good friends at Portavadie will be my official sponsor for Sundays Race. If you have not had the chance to visit the new Spa & Leisure facility at Portavadie then you are missing a treat. 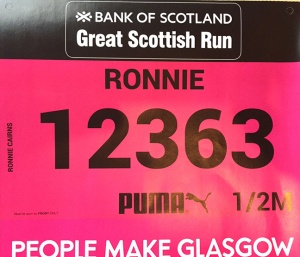 My training has been going great although I did pick-up a calf injury on Monday so I have had to rest so that I can be fit for Sunday. I tried a couple of miles tonight and although I could still feel it, I am on the mend and no matter what; I will get it out of my mind for Sunday, so no excuses!

“If you enter the arena carrying some excuse for underperformance, you’re prepared mentally to lose. Be 100% in your mind & go 100% for the win.” Frank Dick

Come Sunday, I will reach my running goal for this year and I would like to thank all the people who has supported me with their kind words and sponsorship over the last year. Many have asked me if I will keep up running after Sunday’s race and the answer is Yes. I will also continue to raise what funds I can for the Yorkhill Children’s Charity as I have seen first hand, what wonderful work they do.

If you would like to make a donation to my fund raising, please go to my Just Giving page https://www.justgiving.com/ronniecairnsrunning

May I wish all the runners taking part in the Great Scottish Run all the best and have a great run. 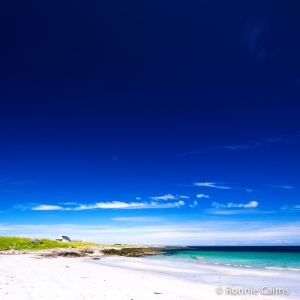 My wife and I are taking a short break on the lovely island of Tiree in the west coast of Scotland this week. The island of Tiree is known in Gaelic as Tir an Eorna ‘The Island of the Corn’, and also Tir barr fo thuinn ‘ the land below the waves’.

It was here last year that the running bug took hold of me, each morning I would get up and run along the 3-kilometer beach in front of the house, the sand is hard packed so easy to run on. I was joined on my run each morning with Gem, our friends brown Labrador but sadly Gem is no longer with us and I missed her company this morning.

A holiday is a break from the pressures of work but not from training, so it was on with my trainers today and off for a nine-mile run round part of the island.

Tiree is a very flat island but it is deceiving because when they build the roads here they just went with the contours’ of the ground and there are many rises and falls, which makes it great for training on.

With out doubt running or cycling is the best was to see this Island, although you have to be careful on the single-track roads, when cars come by so not a good idea to wear headphones although it does add to the atmosphere of the run if you are listening to a bit of ‘The Angry Fiddler’ from Skerryvore or ‘Walking on the waves’ from Skipinnish but keep them for the beach or when running over the machair. 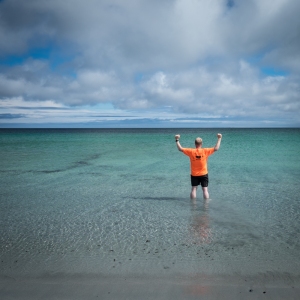 My run today started at Lower Kenovay on the west side of the island and I headed east past the airport to
Crossapol Bay, where the kite surfers were already out enjoying the waves. From Corssapol Bay I turned along by Island House, the Duke of Argyll’s holiday home and back over down to Cornaig and along to Loch Bhasapol, where Wild Diamond have their surfing school, then a small loop and back to enjoy a short beach run along Balephetrish Bay. As I had now reached the sea and could go no further, I just had to take a paddle in the clear blue water of the Atlantic to cool down. 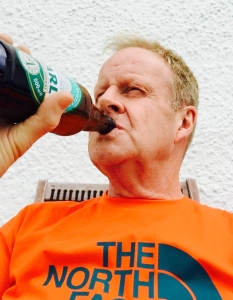 After any long run it is a good idea to rehydrate, which for me is usually an SiS recovery drink but on this trip I forgot to pack this so the next best thing is a LFA recovery drink, in other words a bottle of Jarl from Loch Fyne Ale’s. Ah! I feel the better of that but may require a couple more recovery drinks before the day is out. Well, I am on holiday!

I thought I would give you an update on where I am to date with things. This Saturday I will be taking part in the Glasgow Men’s 10k and this will be my last race for eight weeks to get down to some training. My training has been going well with the assistance of my coach Derek Hawkins at Hawkins Running. I am doing about four training sessions a week. This week on Sunday I did an easy nine miles and then on Tuesday it was down to Dunoon Stadium for some interval training on the track, which consisted of a 12 min run at easy pace with three 6 min intervals with a minute recovery jog between them and then finishing off with another easy 12 min run. Tonight, Thursday it was another 9 miles in the rain and tomorrow I have a nice easy 35min jog (I like this one best) then a rest-day on Saturday getting ready for the race on Sunday. When I started running late last summer, I never thought I would manage this sort of weekly routine but it has just been amazing what a bit of dedication and good coaching can do and better still, I am really enjoying it all. 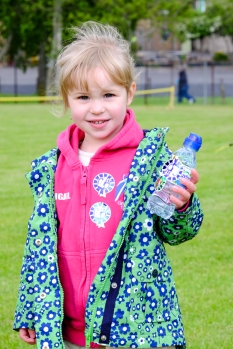 Enough of all this, I had cause for some celebration today. I took an hour off work this morning to go down to see my granddaughter, Abigail at the Kirn School Nursery sports. She did really well with three firsts, two seconds and a third and I was very proud of her although we have identified that we will have to do some work on her beanbag race technique over the winter season but we will get it sorted for next year. As the sports came to an end it was time for the fathers race and as the numbers were low, grandfathers were invited to join in. Now not to be one who ducks a challenge the bold Ronnie lined up for the race. This was my chance to make my granddaughter proud of me, even although I was the oldest person in the race. I eagerly waited on the start and then we were off, I had a slight slip but soon gained my footing and headed for the tape as if there was an Olympic gold medal at stake. As I came to the tape, I was still at maximum speed and nearly took-out a few mums and kids as I crossed the line. Photo Finnish! My supporters on the left said I had won but the supporters on the right said this man half my age had won, he was probably an older brother and not a father anyway and should have been disqualified. 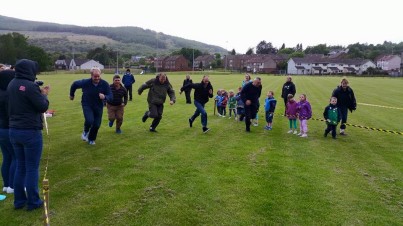 What can you do, not that I am competitive but you can clearly see from the photograph here there was no way I was losing this one. Look at the race face, look at the drive from the right leg, look at the arms as they power through my body, look at that 50+ guy making an absolute fool of himself! If the truth be known I think the guy did pip me at the post but hey! a silver medal is still an achievement at such a prestigus event. It was great fun and the kids had a good laugh at our expense.

I am delighted to announce that I have teamed up with Team Scotland, Commonwealth Games and International endurance athletes Derek and Callum Hawkins, who are coaching me through my running challenges this year, to raise much needed funds for Yorkhill Children’s Charity. Both Derek and Callum have had very distinguished international running careers and although they both continue compete on an international level they are also coaching athletes of all abilities reach their own running goals through Hawkins Running. www.hawkinsrunning.com However now they have taken on their biggest challenge yet, getting me into shape to meet my targets for this year. We have been working together for the last month and I am already seeing improvements in my running and enjoying training more. Each week we review my previous weeks training and how we felt it went and they then set my plan for the following week. Over the past few months my training was all over the place, I had adopted a no pain no gain attitude to my training and Derek and Callum have turned that upside down, giving me more structure to my training, working on my endurance with longer easier paced runs with one or two shorter runs (some of which include some running at higher pace). Derek and Callum have also kindly agreed to take some time out of their very busy schedules to visit Yorkhill Hospital, in person to share with the children, their experiences in taking part in the Commonwealth Games in Glasgow last year, which I am sure will go down a treat. If you haven’t had the chance to donate to my fund raising efforts and would like to, you can simply go to my JustGiving page at the following link – www.justgiving.com/ronniecairnsrunning 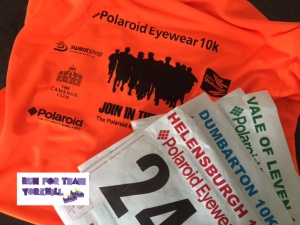 I thought I would give an update today on how my training is going for the running events I am doing to raise funds for Yorkhill Children’s Charity.
Things have been going well and out on the roads three to four times a week enjoying what has been some reasonable weather apart form last night where I had to dodge the waves while running along the prom. I have just recieved my numbers in for the Polaroid Series of 10k runs with my first one this Thursday in Helensburgh.
It’s typical that I picked up a bit of an injury this week but thanks to Elaine at Cowal Physiotherapy Ltd, I have had some treatment and things seem to be easing off, so I have no excuses for not having a good run on Thursday.
If you have not had the chance and would like to donate to my fund raising efforts, please go to my Just Giving Page as every little helps those much-needed children. https://www.justgiving.com/ronniecairnsrunning