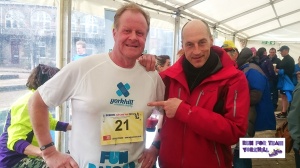 Well my first race completed, I did it! I had a great day taking part in the 1st Dunoon Ride and Run for many reasons.

I got my picture taken with Graeme Obree (The Flying Scotsman) – cycling legend, two times world pursuit gold medallist and twice holder of the renowned hour record, who was the guest of honour at today’s event. Graeme also took part in the cycling race and yes, he did win it and on a recycled bike, not one of the high-tech ones he usually races with. I also found out that we both have something in common: Graeme also supports my chosen charity, The Yorkhill Children’s Charity.

I really must take this opportunity to thank the organisers PA23 BID – Destination Dunoon and No Fuss Events for putting on this event. It was a fantastic experience for me and I enjoyed every minute of it.

People make events and that will never change. When I used to take part in running events back in the late 70’s and 80’s people were the same, full of enthusiasm and encouragement for each other. The only thing that has changed for me is that they all seem so much younger now!
Sitting here at the computer, I am looking back on the day with many fond memories. From mingling about and chatting to competitors and supporters before the start, to when the race started and all the runners who gave me encouragement as they flew by me until I found my pace. Thankfully I met with Linda Nairn and Shona Ritchie who seemed to know what they were doing and I then managed to settle in to a comfortable rhythm with them.

The first stage on the map seemed to be an easy run until I realised the organisers had put in a slight twist on it, sending us through a wooded area in Hafton where even dog walkers do not venture which seemed more like a Tough Mudder than a trail section. I managed to get though it and traversed the next section, which I thought would be tough going with the conditions underfoot. I need not have worried because I had the company of Jean Bryson for this part of the race – we both just talked our way through the section and it was over before I knew it!

A quick drink and it was then onto the Dunoon Stadium for a sprint of two laps of the track! “Sprint” may have been taking it too far, more like a reasonable canter. Then it was the long traverse to the Bishops Glen. On the way it was great to see some of the local residents at their doors and conservatories cheering on the runners as they passed. As I arrived at the start of the stage, the Marshall said: “Well done, only another three miles to go”. I did not say to him what I was thinking at that point and just went on my way. I have run up the Bishops Glen many times in training but for some reason my legs were starting to feel the worse for wear this time. The momentum kept me going and before I knew it I was on the downhill and onto the promenade for the run home. I’m sure the local council extended the promenade for this race or maybe it just felt like it.

As I came into the finishing straight I was met with the most wonderful of welcomes I could hope for – there were all my grandchildren with posters saying “Go Paps”. I could not help but go up to them for a hug only to realise that I had not clocked in my timing chip. So no matter what you see, I was at least two minutes faster than the official time.

The other highlight of the day was taking part in the event with my two sons, Grant and Iain, something we have not done since the Innellan fun run back in late 80’s. The only difference being that I used to beat them back then.

For those that have been following me on Facebook, this was just my first event of ten, which I am doing to raise funds for the Yorkhill Children’s Charity. If you would like to know my story and donate, please go to the following link www.justgiving.com/ronniecairnsrunning